Auditions are 1 of 3 main activities your idol can do during a Produce. Like Fes, you face off against other idols in order to appease the 3 judges while gaining the most stars! However, in Produce you don't have your other Fes idols to help out, so your Produce idol teams up with their 4 of their Support idols onstage instead.


Special Auditions are time limited. These Auditions are only available at the last week of a season after fulfilling certain conditions. Clearing a Special audition will reward you with more stats or fans than a normal audition.

Regardless of whether it is an audition in W.I.N.G., the prelims or finals of Fan Festival, or G.R.A.D. part 1 or 2 or even the loser comeback in G.R.A.D., the layout of auditions are similar: 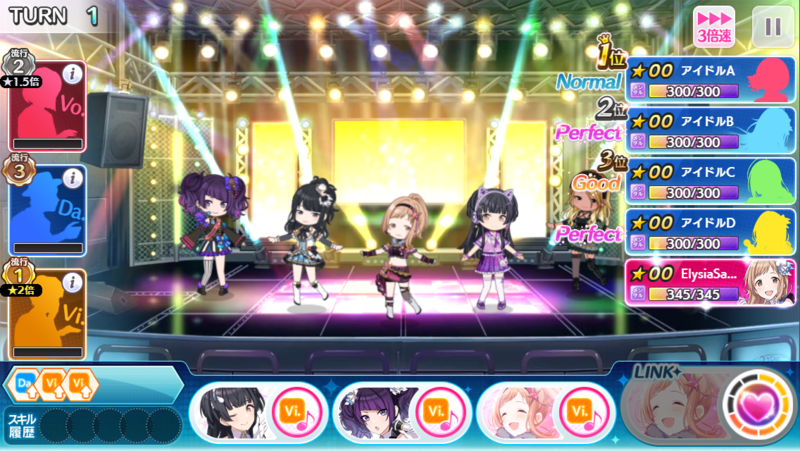 The left side of the screen shows the judges as well as their respective trends. Below that is the passives list which shows the passives that are currently active. Below that is the skill queue, which lists down the last 5 idols whose skills you have used. The right side of the screen are the idol units, including your own and their respective star counts. At the bottom center beside the skill queue and passives list are the available appeal skills. You can have up to three appeal skills at a time. At the bottom right beside the appeal skills is the memory appeal gauge which if filled will let you use memory appeal.

The buttons on the upper right increase the speed of the fes animations, and pause the game. bringing up a menu which shows on one tab all the buffs that are active on your character, and on the other tab the skills that your fes units have. The bottom left part of the menu shows what song is playing during auditions.

The goal of auditions is to gain the most stars. You gain stars by either getting a certain amount of appeal points to a judge, getting the last hit on a judge (last appeal) or getting the most amount of appeal points on a single judge after the last hit was made. (top appeal) Also like auditions, fes follows stat trends which determine how many stars can a judge give. The following table shows the amount of stars you can gain per stat trend:

When the memory appeal gauge is full, you can use the memory appeal. A film strip-like animation will then show up with a pointer on top. If the pointer lands at "good" then your memory appeal will deal normal damage and will be the first on top of the appeal priority list. Otherwise if it lands on bad, then, the damage will be much lower and it will proc after the judges attack.

If you learned the produce idol's appeal skills, they can have the word "link" above them. Same with the memory appeal. This means that the skill has a link appeal. Link appeals can proc after a regular appeal or memory appeal when the skill queue has the idols that are listed in the link appeal's requirements, usually members of that idol's unit. When a link appeal can be made, the "Link" word will glow pink, meaning it can proc. Link appeals can have unique effects and can help turn the tide of an audition so do keep an eye on that!

There are three kinds of auditions for W.I.N.G.: Regular Auditions, Special Auditions, and W.I.N.G. itself. Below are the AI patterns for each audition.

The following Special Auditions are only available on the last week of each season for a limited time during certain events.

Retrieved from "https://shinycolors.wiki/w/index.php?title=Audition_Info&oldid=21537"
Categories:
Cookies help us deliver our services. By using our services, you agree to our use of cookies.