S.T.E.P. ~Shining. To. Evolving. Performers.~ is a Produce mode scenario that was introduced to the game on the April 28, 2022 update. As of its implementation, no commus are available in this mode, but it will be added at a later time.

S.T.E.P. is unlocked by completing Season 1 of W.I.N.G. and creating a Fes Idol at least once. 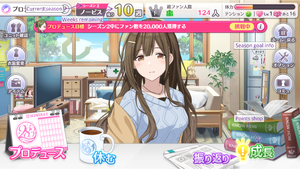 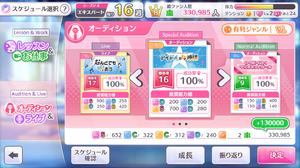 Left is a Live indicated by the purple title;
Middle is a Special Audition that awards more fans;
Right is a Normal Audition with lower difficulty;

Successful rate of audition and lives are determined by the current produce idol's stats and learnt abilities.

Each successful Lives awards a special live ability and +1 affection but has a higher difficulty rating and awards no fans. Live abilities also improve the success rate of auditions and lives.

Auditions and lives of each season are detailed below: 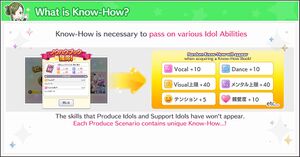 Knowhow books can be acquired after producing a fes idol in any produce mode. 5% of the idol's final stats are being passed onto the book along with some knowhow abilities. Knowhow books are permanent unless manually sold for money. 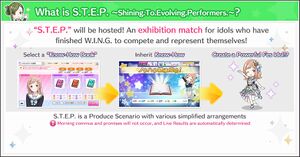 Each knowhow ability has a level from lv1 to lv5 , which indicates their chance to drop during a STEP run with lv5 being the highest chance to drop. Having the same ability on 2 or all 3 books increases the likeliness of the ability to be dropped significantly. 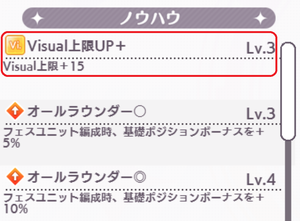 The first knowhow on each knowhow book is called the Head knowhow. Head knowhows are unique that they always drop 3 times on each STEP run regardless of knowhow level.

Retrieved from "https://shinycolors.wiki/w/index.php?title=S.T.E.P.&oldid=25145"
Categories:
Cookies help us deliver our services. By using our services, you agree to our use of cookies.