Unlike most gacha games which require you to create new accounts and clear data to reroll, ShinyColors gets rid of all that nonsense and added a reroll gacha banner. With this banner, you can reroll as many times as you want until you get a desired roll. Just keep pressing the yellow reroll button! Only press the pink ok button when you are sure of your choice.

Accessing and Rolling in the Reroll Gacha[edit | edit source]

The reroll gacha can be found in the gacha page, at the very top of the gacha list. To start rolling press the yellow button on the lower right part of the screen, as seen on the image: 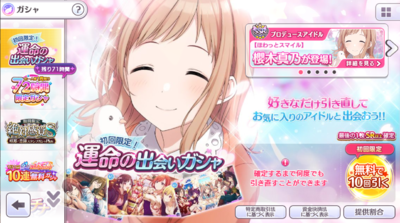 After getting the gacha results, if you are not satisfied with your roll, just press the yellow reroll button. You can skip the pull animations after pressing the reroll button by inputting this link into your browser: https://shinycolors.enza.fun/redrawGashaResult 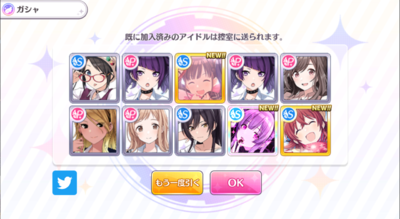 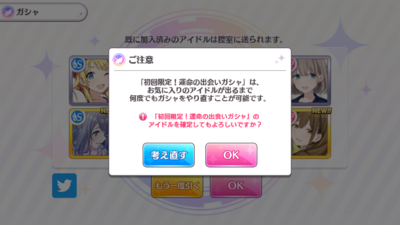 Who should I aim for?[edit | edit source]

Generally when rerolling, the goal is to have at least one Produce SSR and one Support SSR. More SSRs are better but given the individual pull rates of each SSR, getting more than 3 SSRs can be quite difficult.

Below is a list of Produce and Support SSRs that you might want to aim for. Of course, if you already have an idol that you are eyeing for you are better off going for that idol's cards. If the current limited banner features your favorite idol, it would be wiser to roll on the limited banner first, before rolling on the reroll gacha.

But if you are undecided or if you just want to see big numbers early, check out the list below.

Also note that the initial P-SSRs (P-SSR1's) of the idols are given out as rewards for true end training, though you can only pick one of those cards. For more information, check out True End Training.

Retrieved from "https://shinycolors.wiki/w/index.php?title=Reroll_Guide&oldid=17521"
Categories:
Cookies help us deliver our services. By using our services, you agree to our use of cookies.