The Fes Portion of the game is one of three main activities which you can do in the game. (The other two being producing idols and sending supports to work.) The Fes portion is similar to auditions and W.I.N.G. in that the main objective is to appease all three judges and obtain the most amount of stars without your mental dropping to zero. Unlike auditions and W.I.N.G., your team composition is based upon the fes idols that you have on hand, and the overall stats of your team will be dependent on your team members. In this mode, you can battle against the AI through Fes Rehearsal you can also indirectly challenge other players' fes units through Grade Fes. 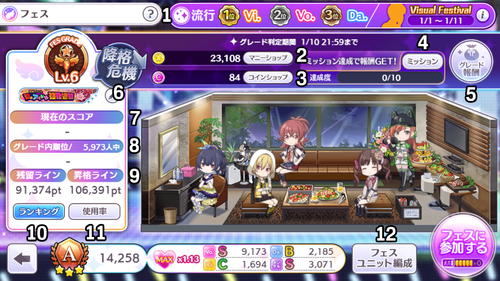 Pictured above is the Fes Lobby. The trending stats for the current time period is shown on the top part of the page, along with the duration of this season's Fes. (1). If a Fes event is on-going, the units that have a bonus will be displayed. Across the top bar, we can see our current Gold Coin count to exchange in the money shop (2), the Fes Coin Shop (3), and the current amount of Stars you have earned in Grade Fes as well as the next Reward you can earn (4). Next to this is the Fes Rewards Button, showing you all the possible rewards from Fes Season placements, as well as achieving certain Grades for the first time (5). respectively (9).

The design of the lobby can change depending on your current grade. The current grade and whether or not you will grade Promote, Grade Demote, or Grade Maintain is displayed on the left side of the page (6). Below it is your current highest grade fes score (7). Below that is your current placement within the Grade, as well as the running total of Players in said grade (8). Further below is the Score necessary to Stay in the grade on the left, or Promote out of the Grade as shown on the right (9). The Blue Button (10) is the Rankings page, allowing you to view the Top 100 of each of the 7 Grades, as well as your current placement within your respective Grade. Next to this is the Bonus Idols button (11), which shows SSRs who have higher or lower usage in each grade. The less common the card is, the higher their bonus they can award after a Fes performance (12).

The huge pink button is where you click to play Fes, clicking it will give you an option between Fes Rehearsal (フェスレハーサル) or Grade Fes (グレードフェス). Participating in either Fes will cost one Fes entry, represented by the small yellow marks at the bottom of the play button on both the home screen and the Fes lobby. Fes entries will recover over time at a rate of one per half hour up to a maximum of five. Entries can also be instantly restored by using a consumable Fes Entry Ticket item. 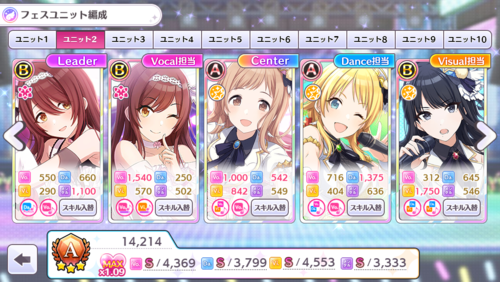 Upon pressing the fes unit composition button, the screen above should appear featuring your current unit. You can have up to 10 units, each having 5 members each. Each member specializes in a specific attribute, similar to how live party units work in Starlight Stage. Idols at the center will have 50% increase in all stats except mental. while each of the three slots reserved for an attribute (vocal, dance, visual) will have 100% bonus to that specific attribute. The Leader slot is special because not only does it give 100% bonus to mental, it's also gives 50% increased chance to proc it's passive skills. The memory appeal level of the unit is determined by the center's memory appeal, while a bonus multiplier is determined by the memory appeal levels of the other 4 members.

If the fes unit contains at least two members of the same unit (i.e. two Illumination Stars members in the fes unit), those members that are from the same unit will receive a 20% boost to all stats. Also, during fes events, specific units can have bonuses to stats for a given time period during the duration of the event.

In fes rehearsal, players get to fight against AI bots with pre-determined stats and skills based on the difficulty. Players can choose the difficulty of the bots after selecting fes rehearsal. There are three difficulties: Easy, Normal and Hard, each with their own money multiplier. By checking the box at the lower right of the screen the player can expend all remaining fes entries at once in exchange for a money multiplier equal to the number of entries used. During Fes Events, a Very Hard difficulty is unlocked, featuring bots with high mental and appeal scores, and judges with high mental and can hurt your mental more than usual. 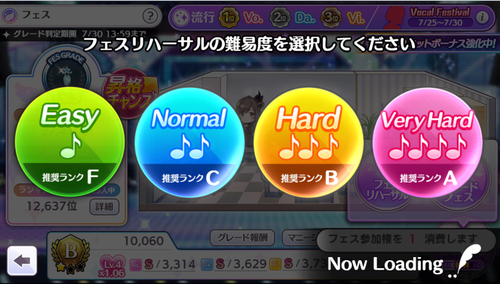 The AI also has a set pattern depending on the difficulty, much like in auditions. The opponents do not use special skills and their stats as well as the stats of the judges are reliant on the difficulty selected. Players will definitely have to rely on their fes unit's stats, skills and passive to win them the fes.

Grade Fes is also AI controlled, but instead of using bots with pre-determined stats, it uses player data and teams. This means that card appeal skills and fes idol passives will also activate during grade fes. Much like fes rehearsal, it has easy, normal and hard difficulties, but the very hard difficulty does not show up during fes events.

The strength of the judges in these three difficulties is also dependent on what grade you are at the moment. The higher the grade the tougher the judges, meaning more mental and more damage that they can deal. Also, your opponents can have much stronger teams as you rise up the ranks, so team building is very crucial for grade fes.

While both grade fes and fes rehearsals give random tension values to your team and to your opponents, grade fes has a specific interface for it prior to starting the fes proper: 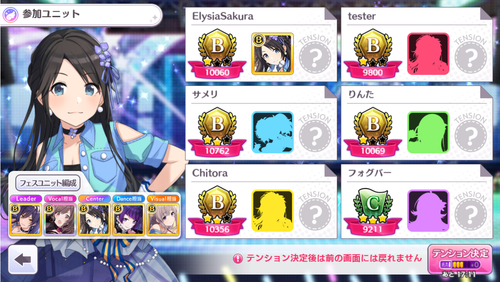 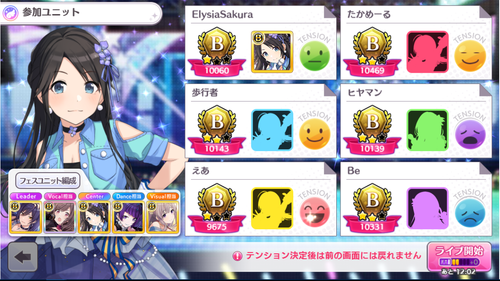 The screen on the left shows the center of your unit, a list of you alongside the five rivals. The pink button on the bottom left starts the tension roulette. There are 5 possible results, as seen on the right. The red very happy face gives off the highest charge for the memory appeal bar, while the purple very sad face forces the player to start fes with no charge in the memory appeal bar. From highest to lowest memory appeal gauge, the tension faces go as follows: red (very happy) -> yellow -> green -> blue -> purple (very sad). This is randomly generated.

Regardless of whether or not it is a fes rehearsal or grade fes, the interface of the fes screen itself is exactly similar to auditions. 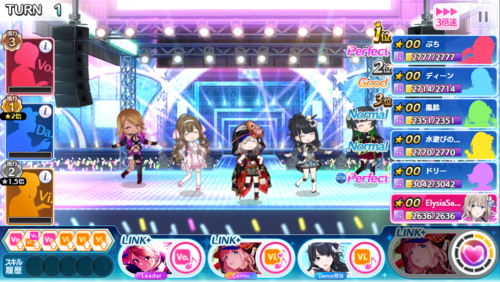 The nameplates with the mental bars on the right represent your unit with your center, and the your opponents units their centers. They will also display up to 5 active buffs or debuffs. Below in the bottom right is the memory appeal gauge, which when filled can be used to activate memory appeal. The bottom center buttons are where your appeal skills are. Up to three skills can be active at a time. At the bottom left part is the active passives for your unit, while below that is the skill queue, listing down the last 5 idols whose skills you've used. On the upper left side of the screen is the turn indicator, below it are the judge icons.

The buttons on the upper right increase the speed of the fes animations, and pause the game. bringing up a menu which shows on one tab all the buffs that are active on your character, and on the other tab the skills that your fes units have. The bottom left part of the menu shows what song is playing during fes.

Much like auditions, the goal of fes is to gain the most stars. You gain stars by either getting a certain amount of appeal points to a judge, getting the last hit on a judge (last appeal) or getting the most amount of appeal points on a single judge after the last hit was made. (top appeal) Also like auditions, fes follows stat trends which determine how many stars can a judge give. The following table shows the amount of stars you can gain per stat trend:

When the memory appeal gauge is full, you can use the memory appeal. A film strip-like animation will then show up with a pointer on top. If the pointer lands at "good" then your memory appeal will deal normal damage and will be the first on top of the appeal priority list. Otherwise if it lands on bad, then, the damage will be much lower and it will proc after the judges attack.

Like in auditions, certain fes idol appeal skills can have the word "link" above them. Same with the center's memory appeal. This means that the skill has a link appeal. Link appeals can proc after a regular appeal or memory appeal when the skill queue has the idols that are listed in the link appeal's requirements, usually members of that idol's unit. When a link appeal can be made, the "Link" word will glow pink, meaning it can proc. Link appeals can have unique effects and can help turn the tide of an audition so do keep an eye on that! 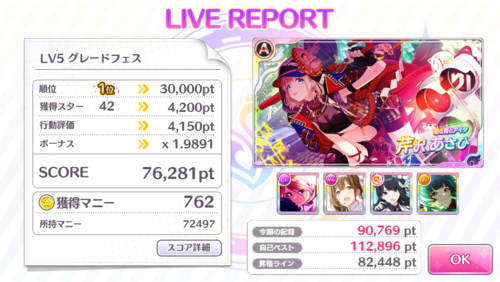 In a nutshell, this shows how many points you have obtained through placement, amount of stars earned, what actions you did (i.e. getting both last and top appeals, coming back from 4th place to 1st, etc.) and the difficulty bonus multiplier. The amount of money earned is based on 1% of your total score rounded down. Below the money total is a button that leads you to a breakdown of the amount of points you gained, as well as all the multipliers. More info can be found here

After this screen for grade fes is the list of rival units as well as everyone's placement. The initial page will show everyone's fes rank, placement, center and fes title. You can also access the unit composition and the individual fes idols for a rival unit by pressing the unit (ユニット) button.

Grade Fes has two types of rewards: The first time rewards, and the regular grade rewards. The former, as the name implies, are rewards that you can only get upon reaching a certain grade for the very first time. Thus you can only obtain these rewards once. The latter, on the other hand, are rewards you can gain every time you get promoted, demoted, or have your grade maintained after the previous fes cycle. These rewards come in the form of the Fes Coin, which is special currency that can be used to buy certain cards, hazuki seals, and costumes, among others. The higher the grade you reach after each rotation, the more fes coins you gain. Here are the rewards per grade, arranged from highest to lowest. Both the first time rewards and the regular rewards:

Added in the Dec. 10 2021 Patch, Grade Fes missions are recurring missions that can be cleared during a grade fes rotation. These missions can give out rewards such as fes coins, pull tickets, continue tickets and more. Note that the missions reset after every fes rotation.

Fes Events are specialized events that involve the fes aspect of the game. Most of the missions in Fes Events can be cleared through Fes Rehearsals.

Retrieved from "https://shinycolors.wiki/w/index.php?title=Fes_Info&oldid=23501"
Category:
Cookies help us deliver our services. By using our services, you agree to our use of cookies.