W.I.N.G., or Wonder.Idol.Nova.GrandPrix., is the very first produce scenario and has been in the game since its inception. The main objective of W.I.N.G. is to reach 100k fans by the end of the fourth season to advance to the Preliminaries then Finals and eventually win and bring the idol to the top. This is also the only mode wherein True Ends for produce cards can be unlocked.

W.I.N.G. is divided into 4 regular seasons, W.I.N.G. preliminaries and W.I.N.G. Each season has 8 weeks for idols to do activities. Each season also has a specific number of fans that need to be gained in order to proceed to the next season, as seen below:

After the initial commus, this screen should appear:

The Display on top shows, from the top center) the number of weeks left in the season, what rank your idol is at the moment, how many fans your idols needs to advance to the next season, the produce stamina gauge, below which is the current idol tension, the level of memory appeal, and the affection gauge which shows how much affection is needed to move to the next memory appeal level. Below the produce stamina and memory appeal level is the button that lets you go back to the main page. Below that button is the options button, just leads to the options menu.

At the bottom part of the screen are the actual produce activities. On the bottom left part is the calendar which leads you to the lessons, work and auditions portion of the run. More on them later. Beside it on the right is a coffee mug, which when pressed (and after a confirmation), your produce idol can go take a break, restoring her produce stamina. In some cases, a support idol's rest mastery will proc, allowing the produce idol to restore stamina back to full or close to full.

To the left of the Trend Screen is a set of papers that when clicked, will lead to the idol skill tree. 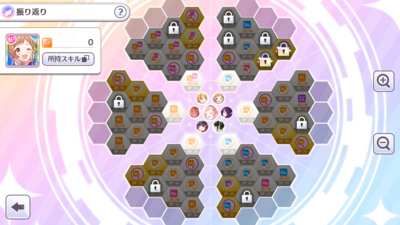 The idol skill tree enables your produce idol to learn active appeal skills and passive skills from her tree, as well as the skill trees of the supports in the unit. Each node costs SP to learn, and the cost is shown at the bottom part of the node. Certain skills need to be learned prior to learning skills in the upper rows. Some skills are locked, which requires uncaps or reading commus for these skills to be accessible. If an appeal skill from a support idol is learned, the same appeal skill in other supports will then cost 0 SP.

The button on the upper left shows the appeal skills learned by the produce idol, as well as her current stats. There are also zoom in and zoom out buttons on the left side.

Pressing the calendar on the bottom left of the produce home screen will lead to the actual produce screen, which lets you choose between lessons, work, and auditions. There are three lesson room, each pertaining to a specific stat: Vocal, Dance and Visual. These rooms give out additional stats of their respective speciality and some SP and fans.

If you want to take that specific lesson or work, press the pink button on the bottom right. Do note that doing lessons, work, auditions, or rest will consume 1 in-game week in the season. Also everytime you take a lesson or do work, there is a chance that that specific room can level up, meaning the room can give out more stats than usual. Also, on the upper right part of the room image is the red failure chance indicator. Should your produce stamina fall below 60%, the failure chance will increase. The less stamina you have the higher the failure chance. When you fail a lesson or a room, you will lose some stats and sp, and lowers your produce idol's tension. The worst thing that could happen is a "catastrophe" which can drastically reduce your idol's stats and sp, and can bring your idol's tension to the lowest level.

Beside the pink button there is also a button which shows the list of masteries that are active for each idol in a given room.

Each week, your support idols can be in one of the rooms, increasing the stats it can gain. Some supports even have room masteries which can have beneficial effects to the run such as more SP gain when a support is in a lesson room or at work.

The support idols also have a bond gauge above them. This can be filled up either by going into a lesson or work with those supports in the room, or by bringing unit or 283pro keychains/towels/t-shirts before the start of the produce run. Filling up the bond gauge will would mean there is a higher chance that the support idol could proc an "Excellent" in the room they are in, meaning you can gain more stats than usual after doing the lesson/work, as well as increased chance of unlocking support commus. Higher support bonds would also mean more damage dealt by their appeals during auditions.

Sometimes there is a chance that a "Perfect" can occur during a lesson or work. When this happens, the amount of stats and sp gained is doubled. There is also the "Perfect and Excellent" event, which means even more stats and sp gained.

For produce cards, there are two kinds of events: Idol and Produce Events. Idol events are specific to your produce idol's card, and only P-SRs or P-SSRs can have such events. P-SRs obtained from events such as produce events or fes events can have 1 idol event, while P-SRs obtained from the gacha can have two, and P-SSRs from gacha can have up to four. Idol events can appear depending on how high the memory appeal of your produce idol is. Sometimes if a IDol does not appear on the previous season, up to two idol events could proc.

Produce events, on the other hand, is bound to the idol regardless of which produce card you are producing. Each idol has four produce events and one is guaranteed to proc every season.

In both Idol and Produce events, most commus can let you choose which answer to give to the idol. These can give you stats and some mental and SP at the end of the commu depending on what answer you choose. To see what stats a choice can give, you can bring a secret memo pad before the start of the produce run.

Aside from lessons and work, you need to do auditions to progress through wing. Each season has a set number of fans that need to be cleared in order to proceed to the next season. Auditions allow you to gain huge amounts of fans in order to meet these fan requirements. For more info regarding auditions in general, please check the Audition Info page.

Prior to the audition however, you and your produce idol will have a quick commu with a choice. Selecting the correct choice can increase the tension of the idol if it is not yet maxed. Otherwise, selecting the wrong choice could lower the tension of your idol. Your produce idol's tension determins how much your memory appeal gauge is filled, if it is at least level 1. Much like the morning commus and the produce/idol events, you can check which answer is the right one by bringing a secret memo pad.

In order to pass the audition, you much each at least top 2 in terms of rankings within the audition. Should you reach either top 2 or top 1, you pass the audition and you gain bonus stats. Some support idols also increase the stats you gain through audition masteries, but require you to be at top 1 to get these bonuses.

If you reached 100000 fans, on or before season 4, you are eligible to enter W.I.N.G. preliminaries. W.I.N.G. Semi-finals works similar to Auditions, but unlike auditions, the preliminaries requires you to reach top 1 in order to advance to W.I.N.G. Finals. Otherwise, the produce run will just end. Should you win the preliminaries, you gain bonus stats and some fans, and you can proceed to W.I.N.G. finals.

W.I.N.G. Finals is also similar to auditions, and like preliminaries, you need to reach top 1 in order to win.

After the post produce run commus, regardless of whether you managed to win wing, or failed to meet any of the target fan counts/not win wing, the end screen is still the same: 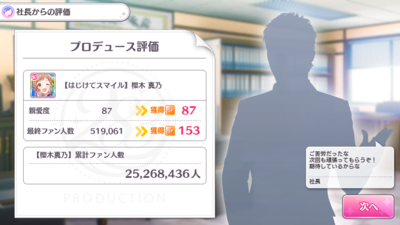 This screen shows how high your idol's affection is and how many fans the idol gained during the entire run. Both of these translate to SP which you can use to unlock appeals and passives.

The screen afterwards shows your post produce stats, showing how much SP you still have, your stats, the skills and passives you have learned and the supports you've used. You can spend the SP by pressing the white button at the bottom right part of the screen, which will lead you to the skill tree. Once you are done using as much SP as possible, press the pink button at the bottom right. It will show a confirmation box indicating how much SP you didnt you and asking you again if you are sure with your choice. If you are really certain with your decision, press the pink button to transform your produce idol into a fes idol Mote that the produce idol card you used will not disappear from your collection so you can still build multiple fes idols with the same produce card.

After the conversion is done you will get a screen that shows the rank of the idol and a gauge that indicates how close you are to the next rank. Afterwards, a window that shows your trust level gauge and the rewards you gained after the produce run will appear. Drops from produce runs include training tickets, produce items, and in some cases even feather jewels. If your idol's trust levels increase, rewards for reaching that level will appear on the rewards pages as well, and a screen showing a special commu with that idol will appear afterwards. After those screens, the ex skill screen will appeal, showing what ex skills your idols have obtained after the run. Finally, the fes idol stats screen will appeal. Here you can choose to lock the idol using the lock button on the upper center part of the screen, as well as set an icon for the fes idol at the upper left part of the fes idol's art.

True Ends are special commus unique to W.I.N.G. Only P-SRs and P-SSRs have True Ends, however those that were evolved through [email protected] do not.

In order to obtain the True End, you must do the following:

Retrieved from "https://shinycolors.wiki/w/index.php?title=W.I.N.G.&oldid=19066"
Category:
Cookies help us deliver our services. By using our services, you agree to our use of cookies.