When starting Shiny Colors, the main menu will be among one of the first things you're greeted by. Depending on the time and number of active events, the screen can look a little busy, but fortunately most of the menus are easy to understand. 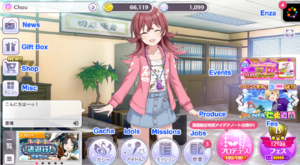 When you begin playing Shiny Colors, the tutorial will take you through a miniature version of the main Produce mode, W.I.N.G. Your main goal in WING is to earn fans each "season" for 4 different seasons, each with a higher amount of required fans to pass. If you fail to meet the fan count requirement, your run ends early. If you clear the end of season 4, your idol will be invited to participate in WING, which has a preliminary round and final round. Passing the finals will be considered the "Good End" for any idol. If you want to True End an idol, you will need to reach A Rank (500,000 Fan total) by the end of season 4, and pass WING finals. Your first True End will reward 6,000 Feather Jewels for a SSR, or 3,000 Feather Jewels for a SR.

The second gamemode, Thanks Flapping Day!, is unlocked after clearing at least season 2 with any idol card. This mode is considered to be more difficult than WING, due to the more obtuse gameplay style. If you would like an example of TFD's gameplay, click here. 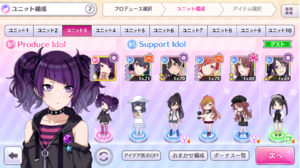 When setting up your team in Shiny Colors for the sake of production, many factors can play into their use. You can choose to pair up idols with members of the same Unit (as indicated by the icon on the top-right of their card portraits), allowing access to Link Appeals for bonus effects/damage. The stars next to card portraits indicate the number of additional copies you have fed into the card via the Evolution tab. You'll hear this referred to as Limit Breaking the card. After you obtain your 5th copy of a card, you can Max Limit Break (MLB) a card, gaining access to all their abilities. Each limit break unlocks a basic passive at 1*, a gold passive at 2*, a stat uncap skill at 3*, and a secondary appeal at 4*. Each limit break on a card also increases their level cap by 5. SR cards start at 40, SSRs start at 60. Supports also have their own set of passives that can activate during the run, which can impact the effectiveness or performance of the run. You can look up cards as you use them by clicking through here.

Underneath each idol's chibi avatar (which if you have unlocked costumes can be changed by tapping on said avatar once), you will sometimes notice icons to their right. These are Mastery icons, which are a quick reference for what they're best at. In the sample image, the SSR Sakuya and SSR Tenka have Visual Mastery Vi, which means that when are in the visual room, working with them yields additional Visual stats. These skills can level up as you level your idol, and may require Limit Breaks to reach full potential.

Lastly, the order in which you pick your supports matters. The first 4 supports you select will join your idol during auditions in the run, and you can use their Support Appeals to sway judges. The final slot, the Guest, is meant to round out any bonuses or effects you'd like to have for the run. Typically this slot is occupied by cards that don't quite work for a composition. In the case of a card like S-SSR1 Natsuha, her passives and effects greatly benefit Dance idols, but her Support Appeal is Vocal, which may not be ideal for the gameplan you want to run.

As for the rest of this screen, the Cycle button allows you to view your idol's performance costumes on the avatars. The on/off button allows you to view Ideas, which only apply to Thanks Flapping Day!!. The next button over will allow you to build a support setup for your idol, based on: Your strongest idols, your best Vocal/Dance/Visual idols. This will reshuffle your support lineup via Hazuki's suggestions. The last button before the Ok button lets you check all of the previously mentioned passives each of your supports have, what level they are, and how many share this same skill. 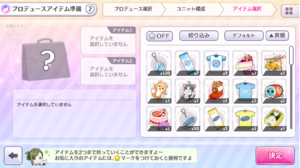 After you select your Produce Idol and Support Idols, you'll be taken to this screen. Here, you can select up to two items in order to help improve/optimize your production run for whatever goals you seek to do. You can learn about all the items and effects through this link. These effects can range from boosting your Support Idol's bonds (which increases their appeal's damage at certain intervals), increasing your chances for Events to occur, consumables to restore Stamina, to shuffle weekly trends, and many more. It is worth mentioning that if you bring a consumable item, the item will be used regardless if you spend it or not at the end of the run.

The main menu you're greeted to after the first morning communication event (In which you assume the role of the Producer, scouting your Produce Idol for the first time) can be daunting to look at. Starting from the top, the game establishes your goal very clearly. Production runs span across 4 Seasons, where each season is represented as 8 Weeks. In turn, each Week is represented by one action you take. So if you send your idol to do a Vocal lesson, this will take one Week's time. Next is your rank, which is determined by the number of fans you've built up, as well as the average total of your idol's stats. To pass each season, you will need to:

Across the top right are 3 important visuals: your health/stamina gauge, your tension indicator, and your memory level. Properly referred to as Stamina, you will need to spend Stamina every week to perform actions such as taking Lessons or working Jobs. If your Stamina gets too low, it increases the likelihood that you will fail your lesson/work, and take a minor hit to your stats. On rare occasions, you can have a Catastrophe, which dramatically lowers your stats if your Stamina is very low. The Tension indicator is how your idol is currently feeling. Tension itself has many ranges, and can be increased by answering them correctly before an audition, picking the right answer in a Morning event, and fulfilling a Promise. A Promise will be a question proposed after they talk to you in the morning periodically. This promise can be a Lesson of any kind, or a week off (Rest). They will also indicate whether this Promise is meant for This Week, One Week From Now, or Two Weeks from now. If you fail to keep your promise after agreeing, this will lower their Tension. Properly answering Morning events and fulfilling Promises also raises your Memory Level. The Memory Level affects the damage/effect of the idol's Memory Appeal, akin to a Super Attack in other games. This can range from levels 0 to 5.

The 5 buttons across the middle 3rd of the screen are fairly self-explanatory. The Supports button allows you to see your support lineup again. Costumes can be used to swap costumes if you didn't during the Team Building section. Items will show the items you've taken, and this is also how you can choose to use consumables by tapping the highlighted button underneath them. Return Home lets you return to the normal Main Menu, and Options are options.

The Planner will let you select your line of progress for the week. Ignoring Auditions for the time being, there are 6 different tasks you can take. From left to right, you have the Vocal Lesson, Dance Lesson, and Visual Lesson. Followed by the Radio Show, the Talk Show, and the Photoshoot. The Lessons all focus on the aforementioned stat, and a small amount of fans and SP gain. The Jobs focus on Mental (Radio), SP (Talk Show), and Fans (Photoshoot), while also having a larger influence on fans than a Lesson, and a small amount of appeal stat gain (The Radio Show gives Vocal, Talk Show gives Dance, and the Photoshoot gives Visual).

After clearing a run, you'll be greeted to a screen that shows the amount of points you earned towards your Memory Level, the amount of Fans you earned, and how much SP these two factors yield. You're given one last chance to spend any remaining SP on skills/passives you didn't grab during the run. Clicking the pink button at this point will lock up the card for good, so make sure to spend that SP! Afterwards, you'll see your card's animation one last time, and the final rank of the card. The pips underneath said rank indicate how close you were to reaching the next rank. After this, your idol will earn EX Skills, as well as raise their Trust Level, which increases based on the Rank you attained during the run. This yields bonus items and small dialogue events. EX Skills are passives you can attach to your idol, and come in the form of Produce EX skills, and Support EX skills. These skills have different requirements to be equipped, and each card has two specific requirements to unlock more EX Skill slots. For produce cards, you first need to True End any version of the idol once. Then, you need to obtain 1 million, 10 million, and 100 million fans to unlock the other slots. For supports, the idol first has to be level 60, then 2* and level 70, finally 4* and level 80. These skills can range from starting with more base stats, having higher chances for events to occur, supports will frequent certain rooms more often, and similar. After all this is said and done, you've completed an Idol and can use them for Fes.

How Should I Plan My Weeks?[edit | edit source]

First and foremost, you want to go into your productions with a gameplan of sorts. Produce Idols all have their own preference of stats, based on their skills. So you can focus on building up these stats along with your fan count each season. But Fan Count is a must if you want to progress further into the mode. Without the 100,000 fans by the end of Season 4, you cannot reach the "Final Boss" of WING, and reach the Good End. But don't worry, as the amount of fans you earn from Auditions each season increases as things progress. Find a workload balance that is comfortable for you, and you'll find success as you smooth out the process. WING is all about trial and error. If you want to see examples of how to reach WING or True End in more efficient ways, check out the Advanced Mechanics page.

Idol C is kicking my butt! What should I do differently?[edit | edit source]

Every audition in Shiny Colors have pre-determined idols that attack judges based on the current trend. How effective these idols are will depend on their primary stat, and how far into the run you are. If you're having trouble recognizing the patterns of attack, and want to make auditions less stressful, check out the Audition Info page.

Retrieved from "https://shinycolors.wiki/w/index.php?title=Basic_Gameplay_Info&oldid=12371"
Categories:
Cookies help us deliver our services. By using our services, you agree to our use of cookies.